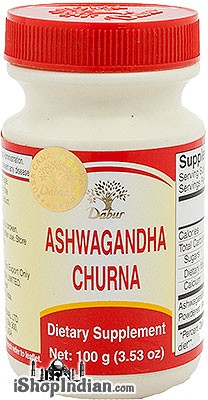 Ashwagandha (Withania somnifera) is an herb that is extensively used in Ayurveda, the traditional health care system in India. It is considered as one of the world's most powerful adaptogens, used traditionally in Ayurvedic herbalism to help the body adapt to physiological and psychological stress. Dabur Ashwagandha Churna is a whole root powder to capture all the plants valuable compounds. The result is a botanical that relaxes the mind, rejuvenates the body, and increases resistance to stress.

Ashwagandha is often compared to chinese ginseng. It is widely used in modern Western herbalism as an adaptogen - a substance that can help our bodies healthfully adapt to physiological and psychological stress, thus increasing resistance to stressors.

Ashwagandha has been used throughout India for thousands of years as a rejuvenating tonifier ("rasayana" in Ayurvedic herbalism), and has been included in the writings of many scholars. It was widely used to support vitality in people of all ages, including children, and to enhance reproductive function in both men and women.

Ashwagandha has been shown to increase stress resistance, improve memory-related performance, and protect against stress induced responses such as anxiety, and physiological imbalances, according to numerous animal studies and several human studies. Well-controlled clinical studies are needed to further confirm ashwagandha's benefits for humans. The key constituents of ashwagandha are alkaloids and a group of steroidal lactones known as withanolides.

Recommended Dosage: 1.5 to 3 grams (1/4 to ½ teaspoonful) of Dabur Ashwagandha Churna twice a day with milk.

24 Mantra Organic Kesar Mango Pulp - No Added Sugar
$7.99
There have been no reviews