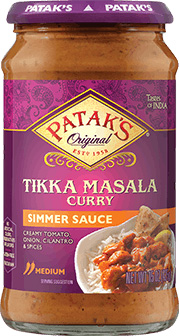 Tika Masala Sauce
About this item

Though Tikka Masala is a classic Indian restaurant favorite, its origins are shrouded in myth and mystery. Some say it originated in the Indian region of Punjab during the last century. Some say it appeared in London during the 1970s. Others claim their grandmother invented it! Whichever story you choose to believe, this rich, orange-colored simmer sauce is a universal crowd-pleaser and the most popular dish on Indian restaurant menus around the globe.

Just pour and simmer with your favorite ingredients: vegetables, meat or fish. Recipe on bottle provided for Chicken Tikka Masala. Can be prepared easily on the stove-top or in the oven.

Haldiram's Dal Tadka - Minute Khana (Ready-to-Eat)
$2.99
There have been no reviews

Nirav Spicy Lemon Pickle
Pretty good flavor. Spicier than usual but I like it spicy. The lemon itself was also good and did not taste stale as if it had been on the shelf for age. Will order again.
PH
Read more product reviews
Read all reviews