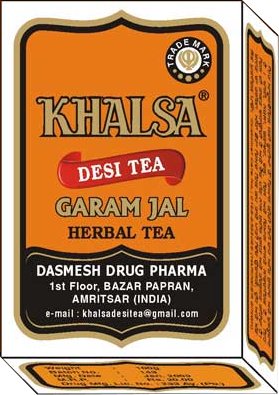 About this item
Our Natural Herbal Tea (Khalsa Desi Tea) is free from caffeine and possesses several therapeutic properties. It can be called as a general body and cardiac tonic which builds immunity of the body besides helping in cough, cold, and flu like conditions and it can be taken daily without any side effects. We are also reckoned as one of the most preeminent Herbal Tea Manufacturers and Herbal Tea Leaves Exporters In India.
Khalsa Desi Tea (herbal tea) is a blend of eleven medicinal herbs/plants which together makes khalsa desi tea, a very good general health tonic/beverage. It is also very useful in cough, cold, flu and soar throat like conditions. It can be taken daily, just like any other beverage. This herbal tea does not contain caffeine as is the case with coffee and tea leaves and so does not cause addiction and acidity when consumed daily. Most importantly, this tea is free from any side effects as it is made from natural herbs. It is a refreshing and an energetic drink with all the goodness natural herbs blended into one formulation. Khalsa Desi Tea comes in 100gm and 50 gm retail packings. Given below is the brief description of some of its ingredients:
Arjuna Bark (Terminallia arjuna) which is on of the chief ingredient of Khalsa Desi Tea, is very beneficial for the heart as it has been proved beyond doubt that it helps in clearing blocked arteries and strengthens the heart muscles. This has also been proved in a research by Dr. K. N. Udupa in Banaras Hindu University's Institute of Medical Sciences, Varanasi (India). In this research, they found that powdered extract of the above drug provided very good results to the people suffering from Coronary heart diseases.
Tulsi Leaves (Ocimum sanctum) which is a very sacred herb in India and which is also very useful in conditions like fever, warding off and even curing peptic ulcers and other stress related illness. Besides numerous ancient textbooks and literature on the medicinal uses of Tulsi, modern day research on Tulsi was reported by Dr. Narender Singh, Assistant Director of the Department of Pharmacology at the King George’s Medical College, Lucknow.
Nagarmothan (Cyperus rotundus) which has been described in Ayurveda as a corrective and remover of endotoxins. It has very good digestive and carminative properties. It is an effective killer of intestinal worms, a diuretic and an antipyretic medicine. Many ancient texts have also described it as an anti-inflammatory medicine, a general and nervine tonic, a promoter of uterine contractions and an excellent binder of stool. Even in ancient times, Nagarmothan was a favourite of Ayurvedic physicians for treating a number of diseases. It is a now a days a drug of choice for treating the majority of gastrointestinal problems like anorexia, vomiting, diarrhoea, dysentery and specific and non specific colitis. It is also used in various other ailments like fever, burning micturation, skin diseases, rheumatoid arthritis, painful menstruation etc.
Similarly, other ingredients of our Khalsa Desi Tea (herbal tea) are also known to have many medicinal and other beneficial effects. The other ingredients of Khalsa Desi Tea are: Talis Patra, Tej Patra, Mulethi, Fennel(Saunf), Jarhpaan (Pan Mool), Dal chini, Piper longum and Red chandan which are known for various beneficial effects in conditions like cough ,cold, soar throat, acidity, flatulence, enhancing general body vitality and appetite.
Tej Patra is a Digestive tonic, and is widely used as a remedy for indigestion, dyspepsia and flatulence.”
Jarhpaan is a Stimulant and carminative. It is especially useful in flatulence, dyspepsia, vomiting and sickness at stomach, being recommended as a remedy for sea-sickness. It tones up the tissues and is sometimes prescribed in fever
Red Chandan – It is beneficial in diarrhea, excessive thirst, fever, blood and skin disorders
Piper longum - Piper longum is widely used in Ayurvedic and Unani systems of medicine particularly for diseases of respiratory tract like cough, bronchitis, asthma etc. Long pepper acts as a general tonic and a haematinic and is widely used in Ayurveda as good rejuvenator (Rasayana) and carminative.
Saunf or Fennel - It favors the digestion, contributes to expel the flatulence and opens the appetite .It also acts as a Diuretic and helps in the elimination of corporal liquids, being very appropriate in cases of obesity, rheumatic and heart illnesses associated with the accumulation of water in the body .It is very helpful in case of bronchitis or cough, as well as when one has a pain in the chest. In a nutshell, it is used to treat amenorrhea, asthma, heartburn, hypertension, and respiratory ailments.
Dalchini – It is very helpful in conditions of gas, heartburn and nausea. It is also used in diabetes as it helps control blood sugar levels. It is know to kill many decay and disease causing bacteria, fungi, and viruses.