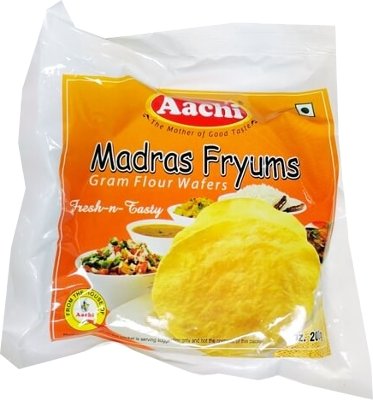 Papadam, (also known as Papad in Northern India or Appadam in Telugu, Appalam in Tamil and Pappadum in the rest of south India; spellings vary) is a thin, crisp disc-shaped Indian food typically based on a seasoned dough made from black gram (urad flour), fried or cooked with dry heat. Flours made from other sources such as lentils, chickpeas, rice, or potato, can be used. Papadams are typically served as an accompaniment to a meal in India, or as an appetizer or snack, sometimes with toppings such as chopped onions, chopped carrots, chutneys or other dips and condiments. In certain parts of India, papadums which have been dried but not precooked are used in curries and vegetable dishes.